Dogs are amazing creatures and it is true that a “dog is a man’s best friend.” For centuries, humans have used dogs not only for companionship, but also for training, teaching, breeding, and support for people with disabilities.

Either breeding dogs for work or for aesthetic purposes has produced a huge variety of dog breeds, each with their own individual characteristics, traits, and personalities.

If you are considering a new dog or are interested in the breeding business, but don’t know which ones will be successful or are more popular, here are some options.

The 18 Most Beautiful Dog Breeds in the World

Below are listed the top 18 most beautiful dog breeds in the world in no specific order. 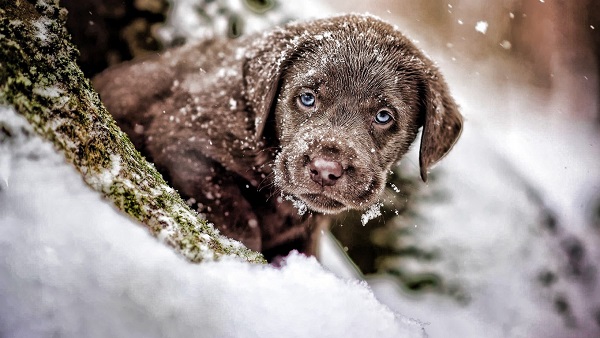 Chesapeake Bay Retrievers are known to be bright, affectionate, and sensitive. They are famous for their waterproof coat, which is wavy and oily to the touch.

They’re solid-colored, being a chocolate brown, deadgrass, or sedge, and have yellow-amber eyes or light blue eyes that complement their coat.

Chesapeake Bay Retrievers are much more emotional than a typical gundog. Although they can be trained, they have a mind of their own. They’re protective of their humans but are also polite to strangers

They are known to be excellent watchdogs and athletes. A Chesapeake Bay Retriever will be a wonderful companion or hunting buddy. 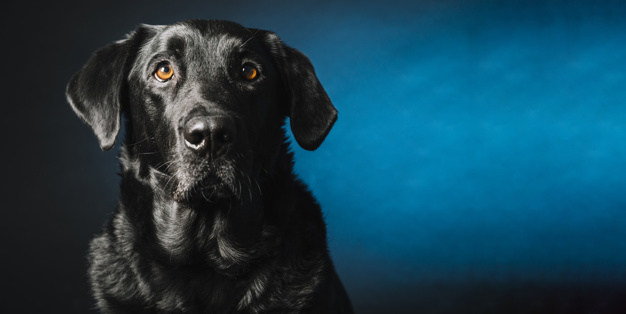 Labrador Retrievers are known to be one of the most friendly dogs, both with other dogs and humans. They will bond with the entire family, including children. But don’t make the mistake of thinking that this beloved family dog has low energy, because Labs are very athletic and love to swim, fetch, and run.

Labrador Retrievers have a dense coat that can be yellow, black, or chocolate. Indeed, they’re some of the most beautiful dogs in the world. 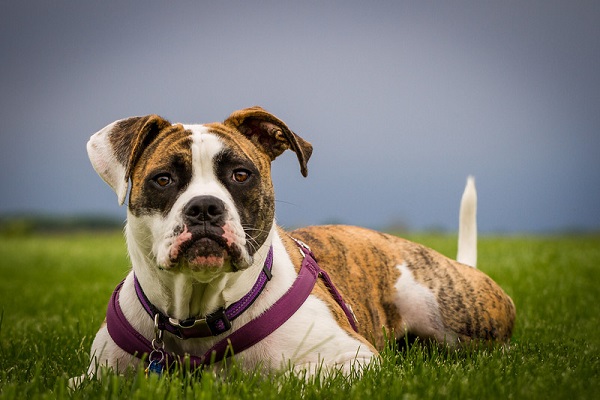 The American bulldog is by far one of the most popular American breeding dogs and is also a popular household dog.  The aesthetic of this breed is its essence of strength and character; it looks at you with confidence and compliance.

There are two different types of American Bulldogs, including the standard type as well as the bully type. The Chow Chow may not be a very outgoing dog breed, but with its fluffy thick coat, curly tail, droopy eyes, and lovely squashed face, it will turn heads around wherever it goes. Chow Chows are mainly known for their signature blue tongues which they develop by the time they are six months old.

This overly cute and majestic dog breed is not the only breed with a black/blue tongue. Another Asian breed, the Shar Pei, has the same feature.

The Chow Chow originates in China but it isn’t clear how it got into Europe and then the Americas. In Chinese, this breed is called “puffy-lion dog” (Songshi-Quan), which is a pretty accurate description. 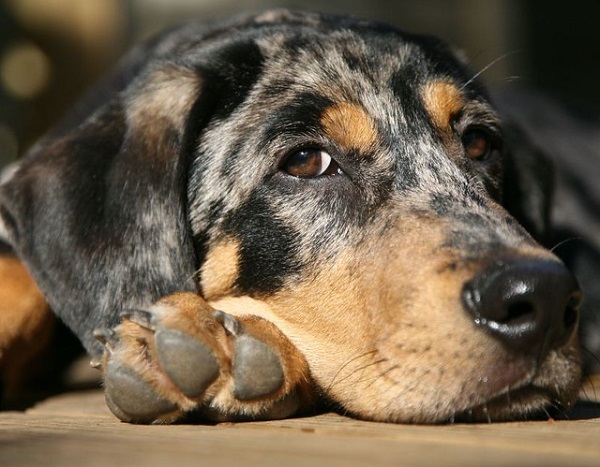 The Catahoula Leopard is a loyal and hard working dog. Originally bred in northern Louisiana, the Catahoula is a tough breed used to track and catch wild hogs, which explains its nickname, “The Hog Dog”.

At first glance this dog gives a striking impression due to the pattern and colorization of its fur.

But its appearance can vary quite considerably from individual to individual, making this dog a unique breed and why it is one of the prettiest. The Golden Retriever is a larger size dog, and is known for retrieving hunted and dead game unharmed, hence the name “Golden Retriever.” Golden Retrievers are very popular in dog shows because of being purebred, their smooth fur, and their golden color.

While retrievers can come from many different nations and vary in looks, they all have the same characteristic: they are loyal to their owner This is why retrievers are chosen for people with disabilities, because they are known to stick it through with their owner, no matter the outcome.

Combined with their adoring personality and their golden glow, the Golden Retriever is a solid choice when looking for the world’s most beautiful dogs. 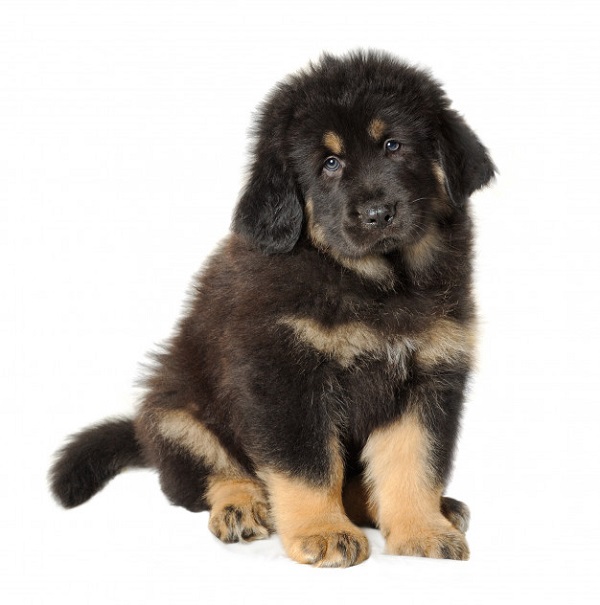 The Tibetan Mastiff is a purebred guard dog originating in the Himalayan Mountains. Legend has it that this mountain dog is the result of multi-generational inbreeding with local wolves in Tibet, with the sole purpose of protecting traders and troops from potential aggressors while on long distances.

It is a protective, strong willed, and loyal dog that is less inclined to participate in games and fun family activities. As an adult it is rather a silent and introvert dog, with a strong bark, and an inborn love for the great outdoors.

Get this dog if you’re after a watchful but a beautiful and fluffy four-legged companion with a strong personality. 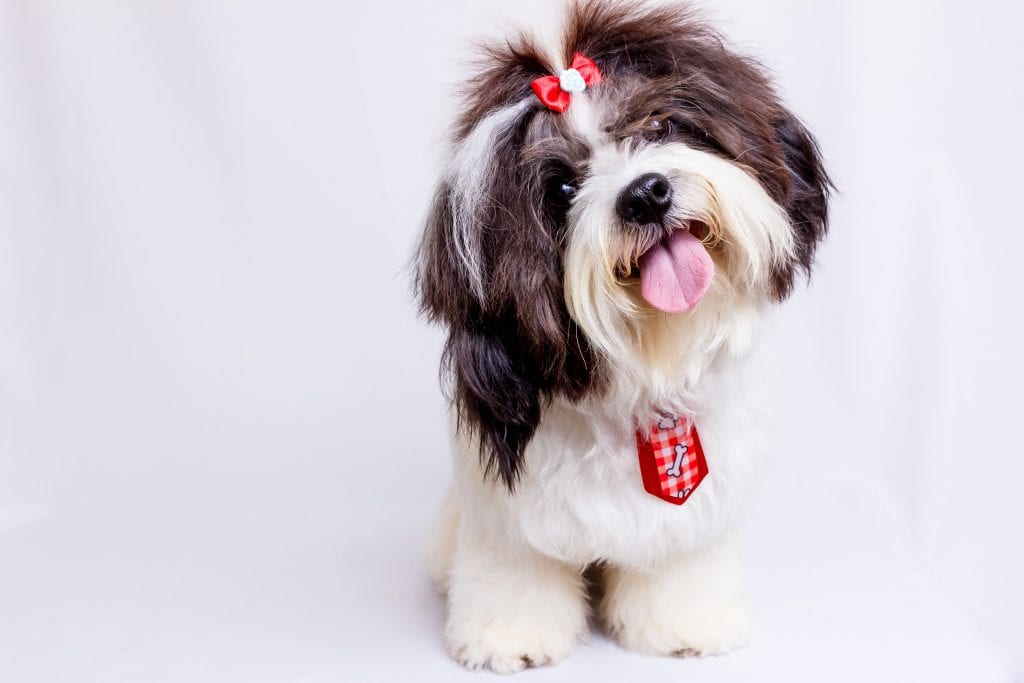 This pretty little ball of fur is the Shih Tzu, a favorite of past Chinese royalty. Another example of elegance and grace on the list, any Shih Tzu dog seems to float across the floor as it moves, an illusion produced by the long silky fur that trails on the ground behind them.

This breed is a favorite show dog, mainly because its fur is able to be styled in any way combed or brushed. They are also a fun house dog and small enough that they will not knock over small children.

Its name translates from Chinese mandarin to lion dog. Quite the irony, eh? It was originally bred for rescue relief in the Swiss Alps and Italy, of which it has become famous for, stereotypically depicted carrying a barrel of brandy around its neck (which has been found to never have happened).

A Saint Bernard is a great dog for cuddling, and it is very similar to hugging a big teddy bear. The long haired chihuahua is the pretty version of its less appetizing short-haired cousin. Except for the think coat, the two chihuahuas are identical: they’re loyal, smart, energetic, and clearly affected by the small dog syndrome.

Paradoxically, even though they are the smallest dog breed in the world, chihuahuas are renowned for their unresolved anger management issues. This is especially true if their owners failed to socialize them as pups. So, it is best to think twice before getting a chi, especially if it’s a rescue.

Aggressiveness and stubbornness aside, long coated chihuahuas make great one-person pets, can literally fit in a purse, and are extremely loyal and devoted to their human. However, they come at a steep price: from $500 to $1,500 for a purebred. Siberian Huskies were imported from Siberia to Alaska in the 1800’s and were bred specifically to pull sleds in snowy terrain.

This made this breed extremely useful to humans who had no other form of mobility in these climates and were proven to be absolutely imperative for the exploration of the North Pole.

Siberians are known for their bright blue eyes, or sometimes even multi-colored eyes. This breed has a gorgeous fur that can range anywhere from black to a copper red.

The dog has a double coat that protects it from harsh winter weather but does reflect the summer heat. A sturdy looking breed of dog, it is praised for its loyalty and its compassion toward its family. Not only is the Doberman Pinscher beautiful and can come in a variety of colors, including black, brown, fawn, blue, and red, but it can also be intimidating at the same time.

No wonder this breed is commonly used as a personal guard dog — it can kill with its looks! The poodle is the very essence of fashion and has been a very popular pet for Europeans for the past seven centuries. These trendy dogs were originally bred in Germany and come in many forms: the standard, miniature, and toy types.

Historically, the poodle has always been a useful working dog, as well as a beautiful show dog due to the assortment of colors and styles that can be applied to its fur. The poodle is a true testament to the beauty that occurs in all dog breeds. A toy dog that was first originated from the North Poland and East Germany regions of Europe, these dogs are adorable with their fluffy fur. Overall, this dog is a complete bundle of joy.

The tail of the Pomeranian is excessively plumed, giving this intelligent little pooch a high degree of character to its look.

Pomeranians are known for their beauty because of their fluffy fur and chirpy personality, and they simply make you want to hold them in your hands and look at you with their big, beady eyes. Samoyeds take their name after the Samoyedic people, a tribe native to the frigid regions of northern arctic Russia. This stunningly beautiful dog was bred to sledge heavy loads and as herding dogs.

Their fluffy, bright white double coat used to keep both them and their owners warm during the long, freezing Arctic nights. Samoyeds are independent but friendly dogs that make great companions for families and children.

They love people and dislike to be left alone, are relatively easy to keep (except for the grooming part), and they have a low tolerance for heat. The Samoyed is an optimistic and calm dog, that often puts on the so-called “Sammy smile,” instantly cheering everyone in its pack. The Akita Inu is a strong, magnificent dog with a big heart and an unyielding fidelity to its owner.

This beautiful Japanese dog breed has caught the world’s imagination with the story of Hachi, a Japanese Akita dog who reportedly waited for its late master to return from work at the same train station every afternoon until its death, nine years later.

The Akita is a calm, loyal, self-reliant dog, who rarely barks. It has strong inborn guarding instincts, so it needs to be socialized as a pup to prevent it from becoming aggressive toward strangers later on.

Just like the Japanese people, it is hard to tell when this dog is mad, angry, or upset as the breed, in general, is very hard to read. So, an Akita may be furious about something and not show it until it suddenly snaps at another dog or person who did something to infuriate it. The Keeshond [KAYZ-hawnd] is great for families with children. They’re playful, energetic, and affectionate, and a joy to look at. Even thought the Keeshond was initially bred as a watchdog, it has become a great apartment pet as long as you don’t leave him alone for one bit.

Its thick fluffy coat protects it against harsh winter temperatures but works against it in hot, humid climates. The Keeshond’s easy-going nature and nice personality have turned it into the Dutch’s favorite canine companion ever since the times when it used to offer companionship to Dutch sailors on their barges and boats.

The Keeshond used to be known as the Dutch Barge Dog, but the name doesn’t really do this dog any justice, as the Keeshond’s excessively friendly personality doesn’t make it one of the best watchdogs out there. With its stubby wrinkled face, huge eyes, curly Danish swirl tail, and characteristically stubby frame, the Pug definitely needs to be on the list.

Pugs were first imported from China to Europe during the 16th century.
Not only are they beautiful, but they make excellent pets, thanks to their personality.

For instance, they are remarkably social and great around children for their endurance and relaxed attitude. The pug will forever be a favorite in the eyes of many.

To Wrap It Up

Our list of the most beautiful dogs on the world could go on forever, but the breeds here have caught our attention. What do you think? Is there another aesthetically pleasing dog bread that should have made it on the list? Leave your feedback below.