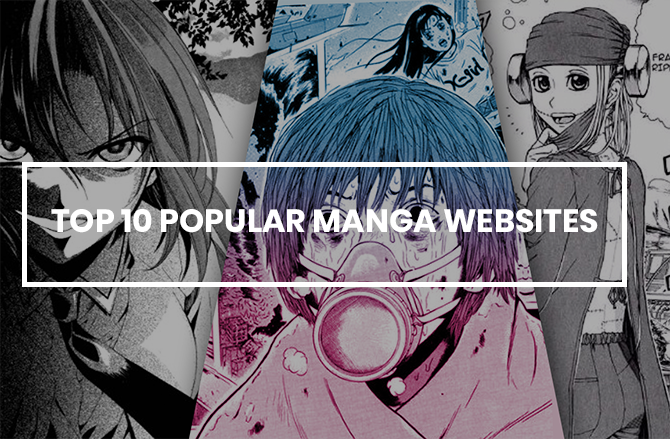 Manga is becoming increasingly popular around the world. It is a multi-billion-dollar industry for Japan, and its most successful industry at penetrating the global market. But the popularity manga has experienced has made it a target for digital piracy. Japan has increased its efforts in recent years to protect its primary export. It can be difficult for users to determine if a site is pirated or legal. When accessing sites offering copyrighted material for free and without ads or other way to pay licensing fees, there is a high likelihood that the site is offering pirated scanlations. Users accessing these sites should exercise care because pirated sites are often riddled with malware or computer viruses.

How the Sites Were Reviewed

The purpose of this guide is to discuss sites that were identified by enthusiasts of this media as the best manga websites available online. Each site was personally reviewed and the various features each site offered were taken into consideration. User feedback and online reviews were also considered where they were available. While no representation is made as to whether a site is offering pirated material, problems experienced while accessing the sites were noted.

Manga is a type of comic written in the Japanese language, following a format that was developed in Japan in the late 19th century. Manga has a rich history in Japan with some of its earliest examples found in 12th century scrolls.

How Do You Pronounce Manga?

While the Americanized version is pronounced mayngah, in Japan it is pronounced mawnguh. Using the wrong pronunciation won’t affect your ability to communicate with other manga fans, but if you want to show your authenticity, it is good to know how to pronounce manga correctly.

While there is a misconception in the United States that manga is written either for children or over-sexed adults, there is in fact a manga title suitable for any literary taste. In Japan, manga is popular among readers of all ages and lifestyles. Some Japanese terms may be helpful in reviewing manga options. Manga bearing the designation shojo is intended for the female teenage audience, while shonen is written for teen boys. There is also the designation of seinen for an older male audience while josei is the designation for a more mature female audience.

What Storylines Are Available in Manga?

The genres covered in manga are as varied as those offered in any other popular reading material. Readers can find material in such varied storylines as comedy, horror, action-adventure, romance, sexuality, mystery, science-fiction, fantasy and detective stories. There are even manga in the business and commerce genre.

What Are the Characteristics of Manga?

Most manga are printed in black and white, with some exceptions. Manga is characterized by its right to left organization, following the Japanese reading convention. They follow a comic style with varying sized blocks containing artwork and dialogue that advance the storyline. Manga are usually serialized with several different stories presented in one publication. When series become popular, the chapters are collected and published in compilations.

Where Can Manga Be Found?

While manga is readily available at bookstores and through online markets such as Amazon, there are also a plethora of websites that offer manga scanlations for free online. The quality of the translations available varies widely from site to site, and as previously noted, care should be exercised as free sites may be offering pirated material. 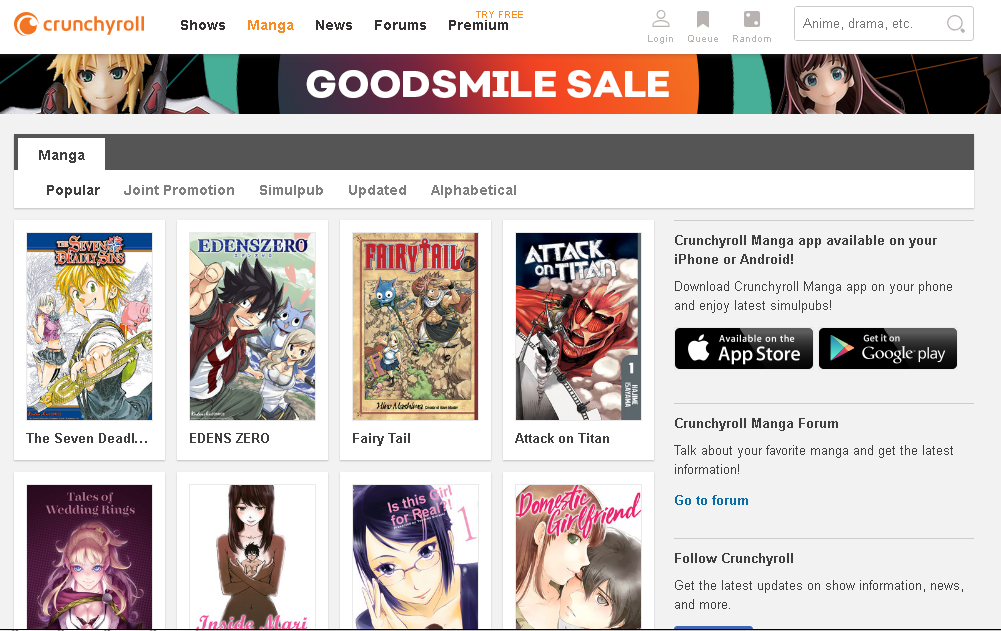 Crunchyroll is a digital manga anthology based in San Francisco, California. It offers several officially licensed titles. Crunchyroll releases chapters simultaneously with their release in Japan, making them available within an hour after they become available in Japan. The HD format is available ad-free for a small monthly subscription. There is also a mobile application that is free to users and paid for with advertising. While several users complained about the advertising, the number of ads presented kept with advertising rates on similar apps.

The home page lists a variety of popular titles. Mousing over the selections pops up an information box that provides a summary of the series, making it easy to browse. The site includes a forum for fans to talk about their favorite authors and artists. The site also provides a news section where manga enthusiasts can keep up to date on events that are occurring in the manga world. 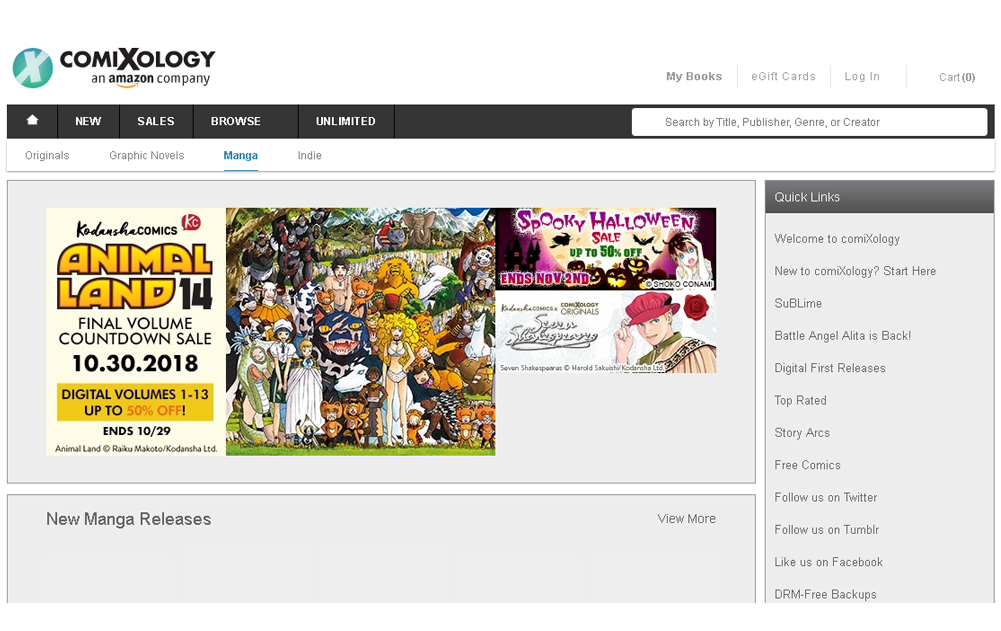 ComiXology is a cloud-based digital distribution platform for comics, including a variety of manga titles. Its popularity led to it being dubbed the “iTunes of Comics” by The New York Times in 2012. It has been a subsidiary of Amazon.com since 2014.

This app provides users with title lists that are available for purchase. Purchases can be downloaded and stored on a mobile device for offline reading. Alternatively, comiXology offers a subscription service allowing users to view unlimited manga for a monthly fee.

Kadokawa, a Japanese manga publisher, offers its own digital bookstore for manga. BookWalker is available for the PC, Android and iOS systems and offers an extensive list of titles. BookWalker also provides free manga titles and allows users to customize their arrangement of manga purchases on digital bookshelves. Additionally, BookWalker hosts a variety of giveaway campaigns for its members.

One of the oldest websites offering free manga online, Mangafox offers a wide variety of old and current titles. Its home page provides a listing of new releases. A mouseover gives browsers the date of release, the author, the artist, a listing of genres and a summary of the manga’s storyline. The mouseover also provides a five-star rating of the material. Mangafox also hosts a forum where manga fans can interact with other people who share their interests.

Mangafox includes an advanced search engine that allows readers to find new material in their favorite genre or that are created by their favorite artist or writer. Search results can also be filtered by the number of stars in its rating system. Its “Surprise” search engine produces a random title for those who are interested in expanding their reading interest.

Another popular website offering free manga online, Mangastream provides a listing of popular titles. Its user interface is less intuitive for newcomers to this media than other sites that were reviewed. Its listing is alphabetical, and there is no way to get information about a series other than what can be gleaned from the title. Mangastream boasts that it provides updates to the titles in its library simultaneously with their release in Japan.

One of Mangastream’s unique features is the blogs included on its home page. The blogs are informative and are a helpful source for fans who want to know more about manga. It also provides manga coloring pages for those who enjoy drawing and want to share their artwork. 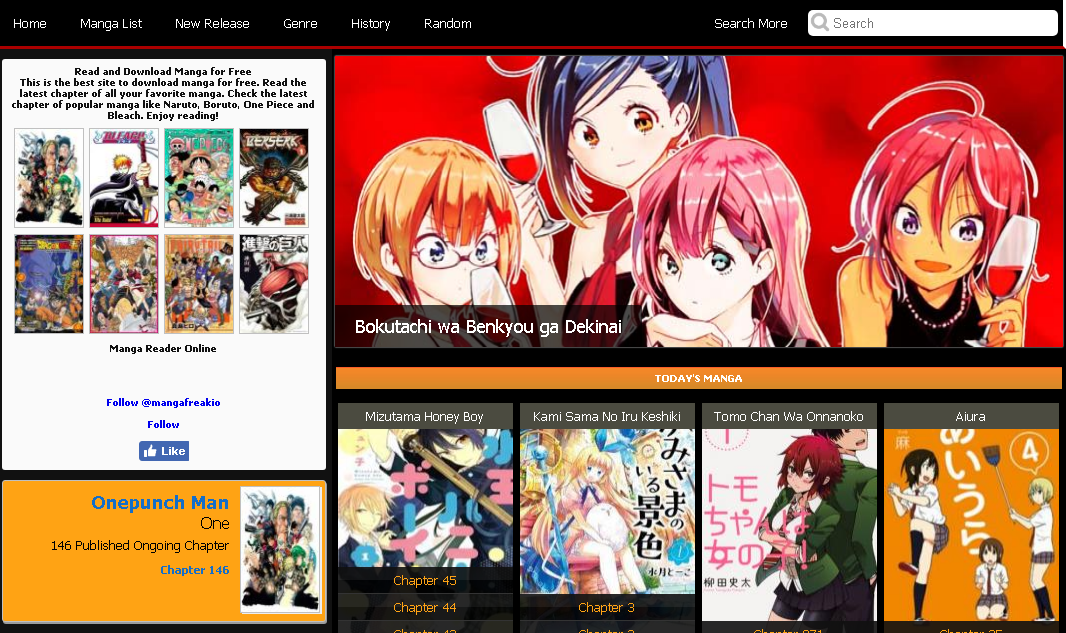 MangaFreak describes itself as an index of work found in the public domain on the internet, similar to Yahoo. Its popularity is derived from the reputation of its database as one of the largest on the internet. However, its user interface is not very intuitive. Offerings are in an alphabetized list with no information provided regarding the series. For readers who know what they are looking for, it is likely that they will find it here. For those who are new enthusiasts, it may be difficult to find material that is of interest at this site. MangaFreak also provides access to an online game designed for mature audiences over the age of 18. 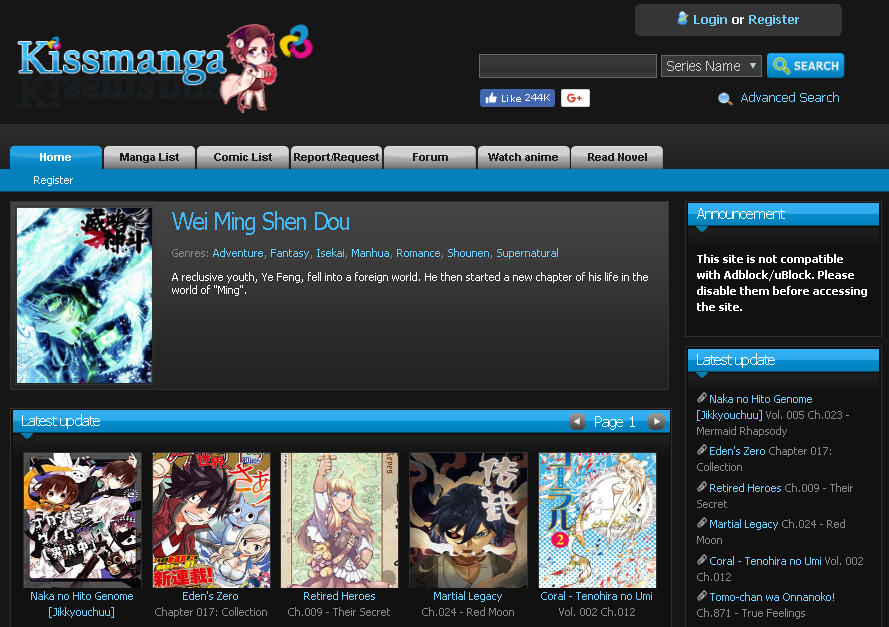 Users of this site should exercise caution, as we experienced a malware attempted attack while researching this article. KissManga offers a large database including both old manga titles and new releases. It did provide a listing of the genres covered by its offerings but was otherwise difficult for inexperienced users to locate titles they might enjoy reading. Its advanced search engine allowed browsers to filter by genre. Further, Kissmanga provides a forum for manga fans to share information with other manga readers. 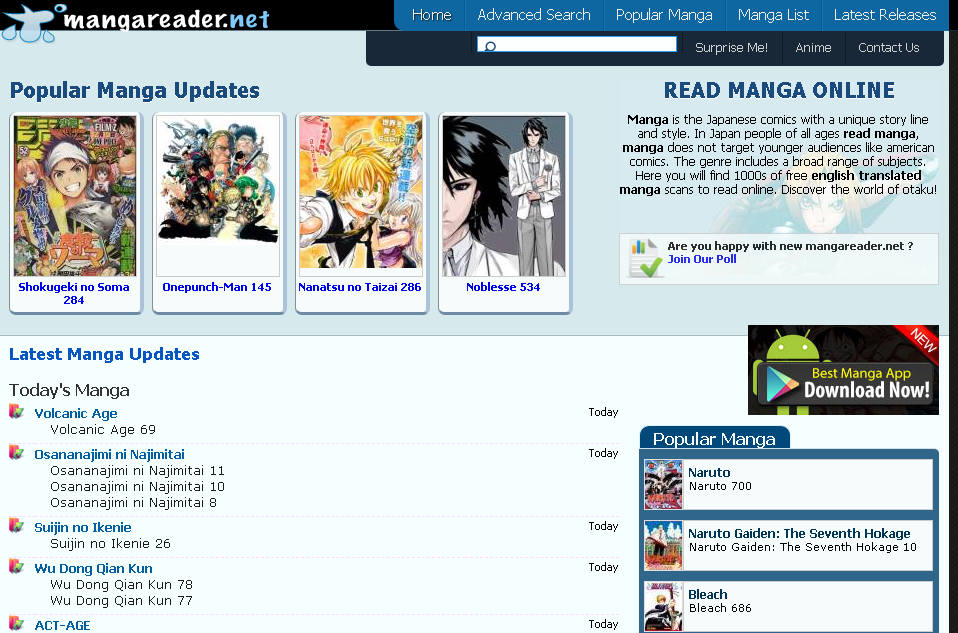 Users of this site should exercise caution as we experienced a malware attempted attack while researching this article. Mangareader boasts a large and varied database. Its advanced search engine included filters for genres as well as type of manga like Japanese, Korean or Chinese. It also included a randomized selection for people who are interested in trying something new. Otherwise, it is another site that is more suitable for experienced manga fans who know what they are looking for. The only information provided about series is the title and when it was updated. 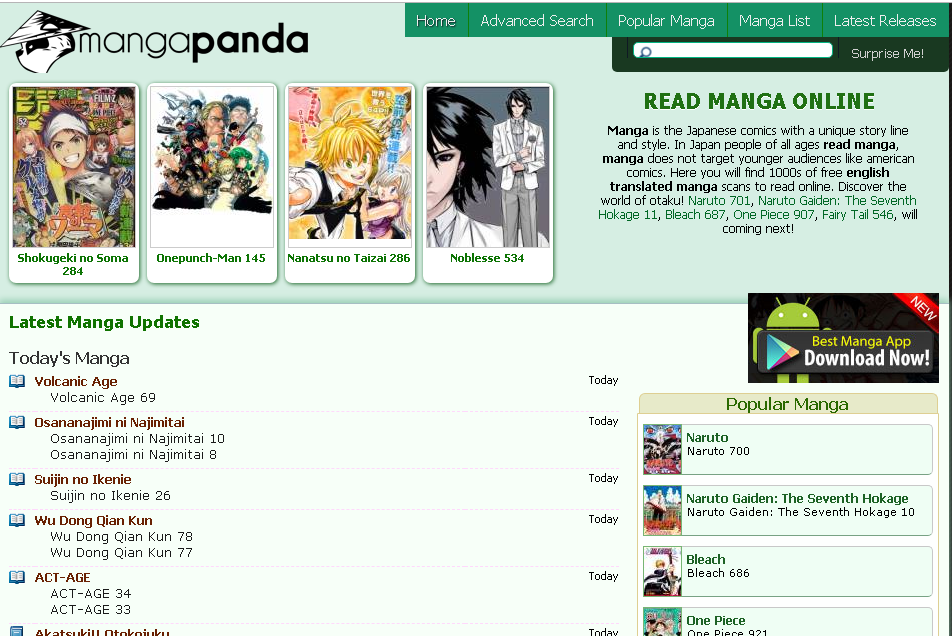 Users of this site should exercise caution as we experienced a malware attempted attack while researching this article. The user interface of the Mangapanda website is very similar to that of Mangareader. However, its database includes titles that are not available on Mangareader. When a title is selected, browsers are able to get information on the series, including applicable genres, release year, completion status and the author and artist. 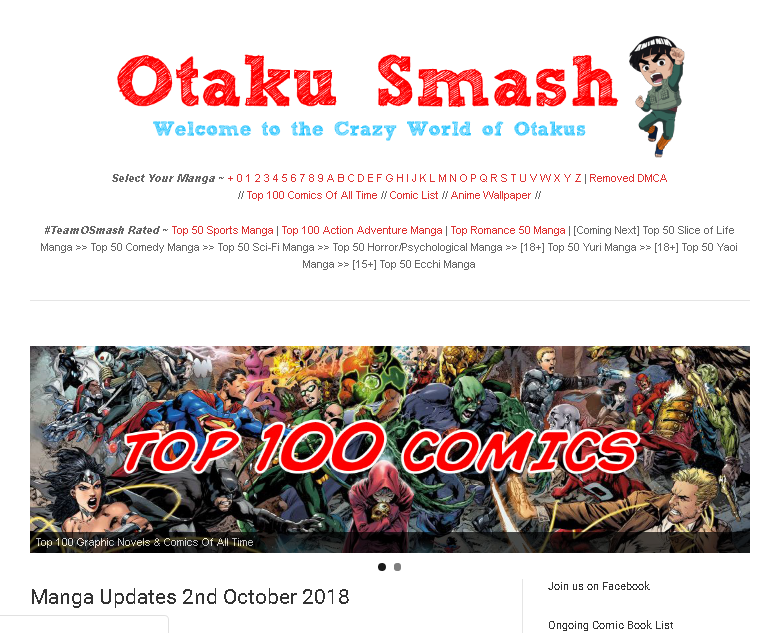 Otakusmash is a well-organized website offering listings of manga titles. Not all of the listed titles are accessible through the site due to licensing issues, but many are available for free reading. The site does not offer a search engine, but users are able to locate recommended titles by genre. Otakusmash includes anime and Western comics in addition to manga. Otakusmash also includes links to variety of additional material such as fanart, news and other areas of interest to manga enthusiasts.

Mangazuki is a popular manga site packed with quality releases. This site has an easy to navigate interface and an uncluttered home page that shows off recent releases and trending issues. Individual manga series are rated by community members and reader stats are displayed to give you a feel for a title’s popularity at any given time. Also, genres are listed for each title to help readers quickly find manga befitting of their personal tastes. A very nice touch is the status detail provided as this tells you whether or not the manga is complete before you begin reading. Mangas open up as scrollable image posts for easy reading, but it might be tough to save your position if you have to stop reading halfway through an issue.

Among the best manga websites for casual readers is Crunchyroll. While its database is limited, this site offers a selection of popular titles and is available on mobile devices through Google Play Store. Fans can enjoy reading for free if they are willing to accept the presence of ads. In the alternative, readers can enjoy their favorite titles ad-free for a small monthly subscription charge.

For experienced manga enthusiasts who are knowledgeable about manga titles and authors, the best choice might be Mangafreak. This site offered a huge database that included older titles that would be of interest to the most diehard manga fan. Its disadvantage to newcomers is that its user interface is clumsy and difficult for those who may not already know what they are looking for.

We would not recommend Mangapanda, Mangareader.net or KissManga because of the malware attacks experienced on these sites while browsing their features.